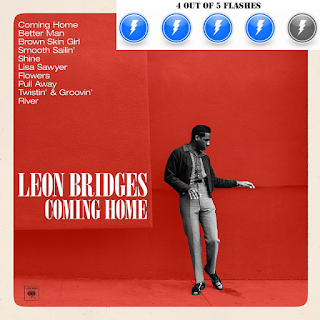 I admit I fell for it. The retro packaging, old-school typography, the classic outfit...I thought somebody had gotten to work reissuing some classic 60's R&B star that we had never heard of. I was immediately interested, and nothing after dropping the needle suggested otherwise.

It wasn't until I Googled our new friend Leon Bridges that I realized he's very much a current artist, an artist carrying a Motown-lit torch and making the kind of records that simply are not made anymore. Recently the title tune justifiably lit up Spotify with a "Most Viral Track".

He's simply fantastic. Smooth like glass, this album is like a treasure of lost Sam Cooke songs. There's nary a bad song in the bunch, and I can't stop listening it. His ace backing band, complete with sax, doo-wop singers and boogie piano envelope with an unheard-of authenticity that you would otherwise need a time machine to replicate.  Haters will cry that he's peddling the wares of a bygone generation, but I'll argue he's peddling the best ones, and in here 2016 he has made a peerless album.